What type of retaining wall do I need?

Retaining walls come in several varieties. Some of the most common types are:

Wood tie wall are common with DIY’ers, they are not as common with the pro’s. These walls tend to have a shorter lifespan than the other methods listed here for a few reasons. Since they are wood and wood will rot most professionals do not see much upside in installing these. The material itself is only slightly less expensive than concrete so there is not much savings there. The amount of digging is the same so no savings there as well. They just install a little faster. For a 1-3’ tall wall that will be installed by yourself you might be happy with this type of wall. For taller walls consider a more permanent solution, doing these things twice can be very expensive.

Concrete blocks look like the ones you remember being called cinder blocks as a kid. They are rarely made of cinders anymore but instead are made of concrete. Concrete Block walls can be used as a retaining wall however they are used more often as a load bearing wall. This is mainly because SRW’s and poured in place walls have taken over this market. Since a concrete block wall often times requires a substantial footing and loads of rebar and a lot of labor most pros would rather just pour that type of wall.

Poured concrete walls are great when done correctly and disasters when corners are cut. One common mistake is to incorrectly lay the rebar inside the form, or use the wrong type or amount. As a homeowner it is important you have a contractor that doesn’t cheat here. If they do you will be paying to do it over. See the picture to the right. When it goes wrong there is no repairing it, just replacing it. That job was done by a contractor in Fishkill, NY and only lasted 3 months before it broke.

SRW’s installed correctly can be a great choice. The upside is that they are easy to install fairly easily. They are lightweight (usually around 100 lbs each) and they look good. The downside is that it is easy to skip steps such as burying courses, geo grid, properly compacting the base, etc. When these steps get skipped the project is in jeopardy. I have seen walls incorrectly installed fail completely.

A gabion wall is made from a cage filled with rocks. These are pretty simple to do, and usually very strong. These are mostly done in industrial areas or by roads and bridges. They allow water to run right through them. The look of them can be debated but most homeowners do not like them for their back yard.

StoneMakers concrete walls are only installed by a network of StoneMakers dealers so the downside is that you may not be able to find a dealer near you. This is constantly changing and chances are if you live in a moderately populated area there will be one. These walls take a lot of skill and know how that no homeowner would know without being taught. The wall because of the proprietary ingredients is much stronger than a normal concrete wall. This type of wall is also much more attractive, as the name implies you make the wall look like stone. This wall is a great choice for almost any retaining wall scenario and is what we use.

Mafia Blocks get their name from the size resembling coffins. Aside from their unflattering name they are extremely heavy and require a medium to large excavator to lift or some other piece of equipment. They are great for making bins at the landscape supply yard to put mulch and gravel in. Most homeowners would not want these things in their backyard. 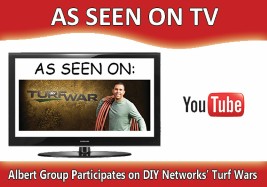 Every pool project is different. Pool School provides everything you need to know to get started and make the right decision for your unique pool project!

Everything you need to know when buying a fiberglass pool. From the best time of year to buy and picking a contractor, to pricing, options, and add-ons!